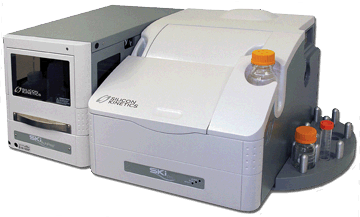 Silicon Kinetics was founded in April 2002 in San Diego, California, as a spin-off from Trex Enterprises Corporation, an advanced R&D house, with core competencies in optoelectronics, materials and systems engineering. Silicon Kinetics is headquartered in San Diego, with tools and nanoporous silicon development and manufacturing facilities.

Silicon Kinetics (SKI) is the first company to develop and deploy affinity capture systems that operate in line with mass spectrometers (AC-MS) to produce more efficient screening tools for drug development applications. Amgen and SAIC are among the early validating buyers of SKI technology. For more than a decade, the competition has sought to develop a reliable and consistent AC-MS system; they have not succeeded. Although SKI’s initial sales have been purchased for drug development research, extending the SKI technology into diagnostic and other high usage applications should enable the company to achieve exponential growth in sales. SKI has targeted diabetes diagnosis and tracking in the GCC Region of the Middle East as the first such high usage application. Our future plans include further clinical and diagnostics applications as well as food safety testing (ongoing detection of pathogens and contaminants).

SKI has also successfully licensed the application of its technology for use in protecting pharmaceutical and nutriceutical companies against drug counterfeiting. The same technology that allows us to detect low abundance biomolecules allows us to create unique tags on each pill with silicon, which is a GRAS (generally recognized as safe) material by the US Food and Drug Administration. TruTag has recently announced a major investment from a leading Chinese packaging company that we believe will presage the market development of its product offering. The Company’s technology has won it a series of awards, most recently as a Technology Pioneer at the World Economic Forum and as a recipient of the prestigious Gold Edison award (see http://www.trutags.com/2009/trutag-technologies-wins-gold-edison-awards-2014/). Royalties from Trutag could scale substantially if TruTags reaches its business plan goals.